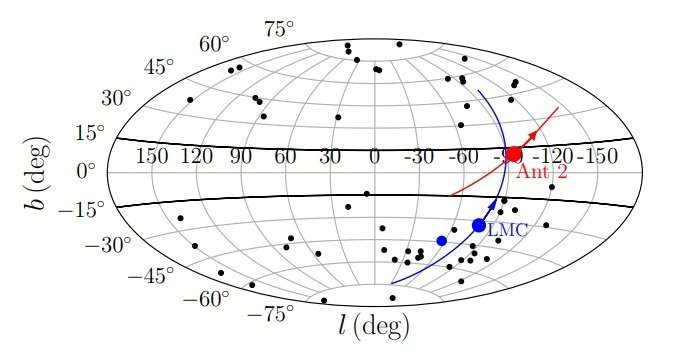 The Milky Way is known to be orbited by  The Large and Small Magellanic Cloud plus a dozens of smaller, gravitational bound galaxies. Although the list of identified satellites is relatively long, astronomers believe that some are still undetected.

With the aim of expanding the list of the Milky Way’s satellites, a team of astronomers led by Gabriel Torrealba of Academia Sinica in Taipei, Taiwan, has conducted a search for new satellites, especially dwarf galaxies. For their study, the researchers used a combination of astrometry, photometry and variability data provided by Gaia Data Release 2 (DR2).

The search resulted in the finding of an enormous, faint dwarf galaxy orbiting the Milky Way, which has received the designation Antlia 2 (or Ant 2 for short). Its nature was confirmed by spectroscopic observations with the 2dF+AAOmega Spectrograph on the 3.9 m Anglo-Australian Telescope and archival DECam imaging. The astronomers refer to the newly found satellite as “the hidden giant,” given that the galaxy turned out to be significantly much larger than other systems in the Local Group with similar luminosity.

Ant 2 is located some 424,000 light years away from the Earth and is estimated to be about 11.2 billion years old. The galaxy has an angular half-light radius of approximately 9,300 light years and a magnitude of –8.5 mag.

The astronomers note that these values make Ant 2 similar in extent to the Large Magellanic Cloud (LMC), but with a luminosity around 4,000 times fainter. They noted that when compared to systems of similar luminosity, Ant 2 is several times larger, while for objects of comparable size, it is about three orders of magnitude fainter.

The researchers also report that Ant 2 is the most diffuse object detected to date, about 100 times more diffuse than the so-called ultra diffuse galaxies (UDGs). Moreover, UDGs with sizes similar to Ant 2 are typically about six mag brighter.

In concluding remarks, the authors of the paper emphasized the unusual properties of Ant 2, which may prove that dwarf galaxy formation can proceed at surface brightness and density levels significantly lower than those so far observed.